The Jewish Voice
St. Louis, Missouri
June 15, 1906 - Page 7
-- Shields school, about eleven hundred of whose fourteen hundred pupils are Jewish children, will have its closing exercises this Friday morning, at the Jewish Educational Alliance Building, corner Ninth and Carr streets. Following is the June class, the motto of which is that of New St. Louis: "To the Front:" Misses Anna Cohen, Jessie Ellsworth, Ethel Graber, Cecile Kellner, Darothy Liebert, Leah Oxenhandler, Mary Piatt and Harriett Rothman, and Masters Herbert I Berger, Thomas Buchman, Joseph W Johnson, Abe Katz, Louis Lehr, Max Levitt, Ben Mable, Louis Oxenhandler, Walter A. Pearce,  Joseph Roman, Joseph Rothman, John V. Urquhart and Harry Yoffe. Only three of the entire class are non-Jews. Following will be the program this morning: Chorus: Pupils of Rooms 1, 2 and 3 recitation; The Wreck of the Hesperus, Anna Cohen; recitation, Smiting the Rock, Abe Katz; essay, "Some good things of to-day, Joseph Rothman; recitation, Sister's got a Beau, Max Levitt; recitation, Ramon, John V. Urquhart; piano solo, Lily of the Valley, Ethel Graber; recitation, Samantha's Talk, Harriet Rothman; recitation, Training the Ruggleses, Cecile Kellner; recitation, Nebuchadnezzar, Max Levitt; recitation, Gifts, Herbert I. Berger; recitation, How Ruby Played, Dorothy Liebert ; recitation, When Mother Sings, Mary Piatt and Jessie Ellsworth; reading, Mice at Play, Leah Oxenhandler; chorus, pupils of graduating class; delivery of diplomas, books, medals, etc., Dr. Foy, principal ; talk to patrons and pupils, N. O. Nelson, Esq.
***
Shields School was located at 1119 North Seventh Street, one block away from 1122 North Eighth, where I have begun my research. In the 1900 census Thomas Buchman was residing at 1109 North Seventh (he may have been related to the Buchmans at 1122 North Eighth), and Cecile Kellner may been listed as Sadie or Annie Kellner at 1120 North Eighth. In 1906 Sadie would have been 17, and Annie and Thomas 14. In December of 1906 Shields School would close, and students would be moved to a new school called Patrick Henry School at Biddle and North 10th.
The 1909 Sanborn Fire Insurance Map of the corner of 8th and Biddle indicates a Jewish School behind 1122 North 8th between the front and rear tenements. Knowing that a public school was probably a quick walk between the alleys before 1906, the Jewish School may not have been built until after Shields School closed. 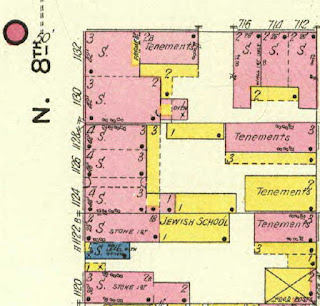 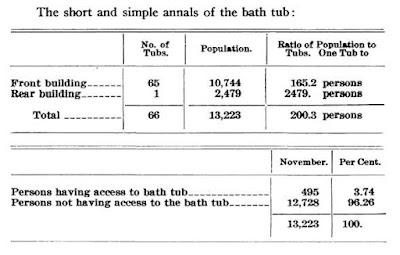